The CPUs and heatsink actually arrived on Friday, two days ago, and I'm just now getting around to writing the post. I don't have a whole lot to say about the upgrade process, it was pretty typical. I only really ran into two snafus: 1) I slightly dropped one of them while placing it in the socket, and the corner fell right on the pins. Normally I wouldn't really be worried but these E5s are rather big and heavy, and two-three pins were definitely bent. Thankfully, with a needle and magnifying glass I was able to easily realign them and the CPU has registered just fine. Also thankfully it was the second CPU socket, so in the event that I trashed the pins, at least the first socket could still work (AFAIK it's not possible to put a CPU just in the second socket of these boards, and I'm not too keen to find out anyways). The 2)nd snafu was that I didn't realize that hyperthreading was disabled - presumably because the precious CPU was just 4c/4t - so all of my initial benchmarks are useless.

First was the way the heatsink seller packed the heatsink. It's in this very nice little enclosure of cardboard and styrofoam. I have actually received heatsinks in the mail that were crushed slightly and had bent fins, so seeing this is nice. 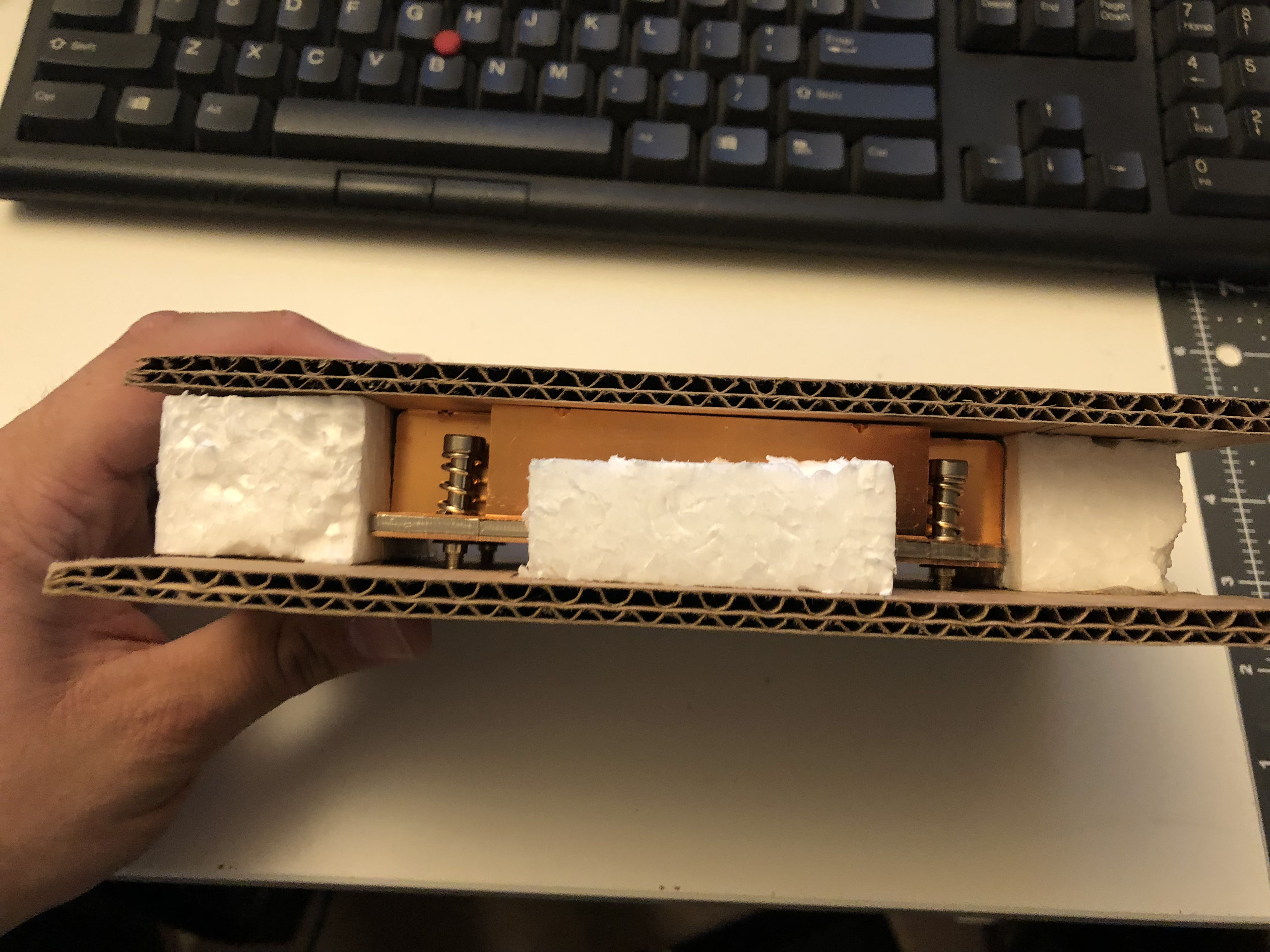 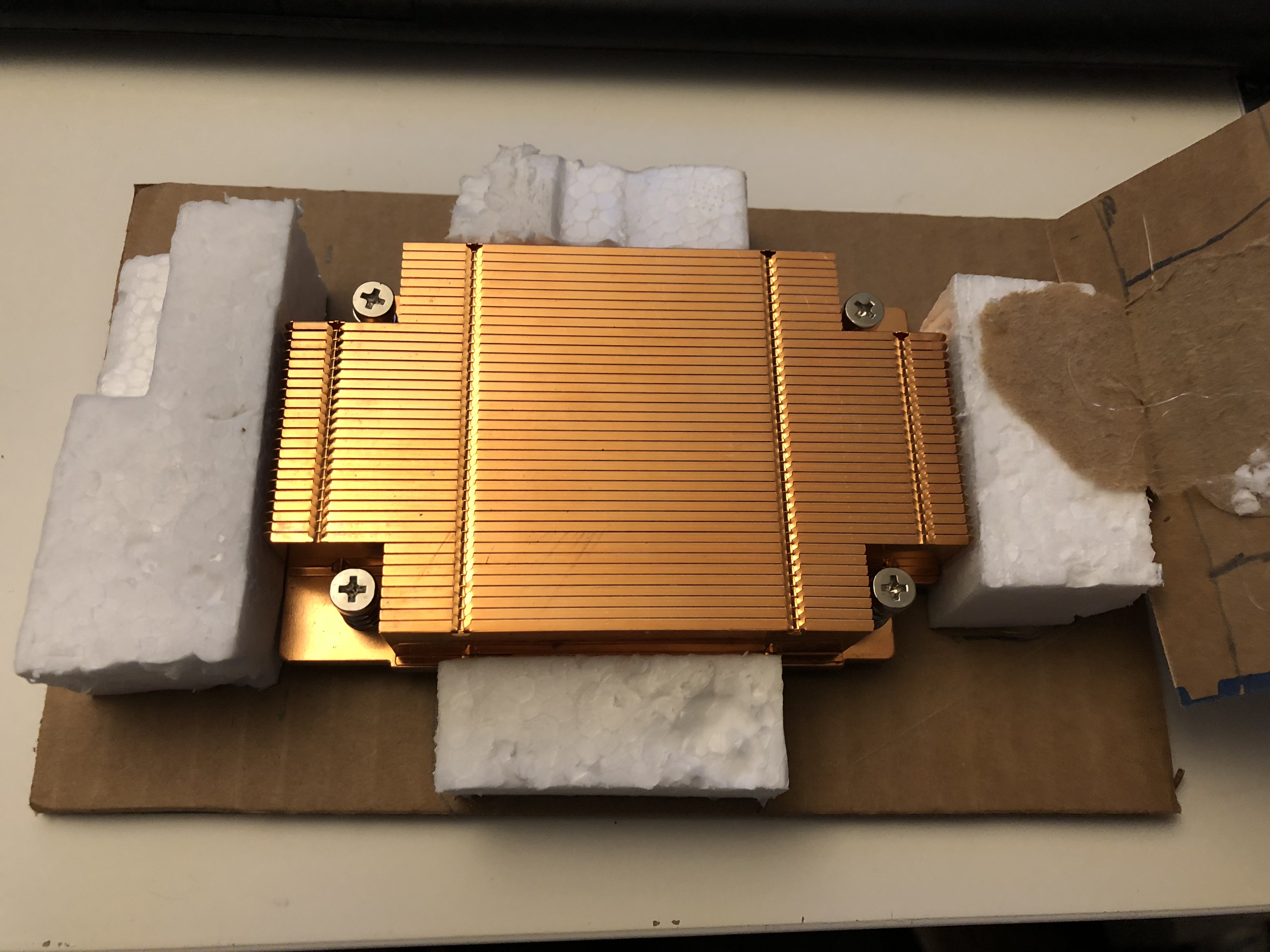 And here's all the bits laid out on top of the chassis pre-upgrade: 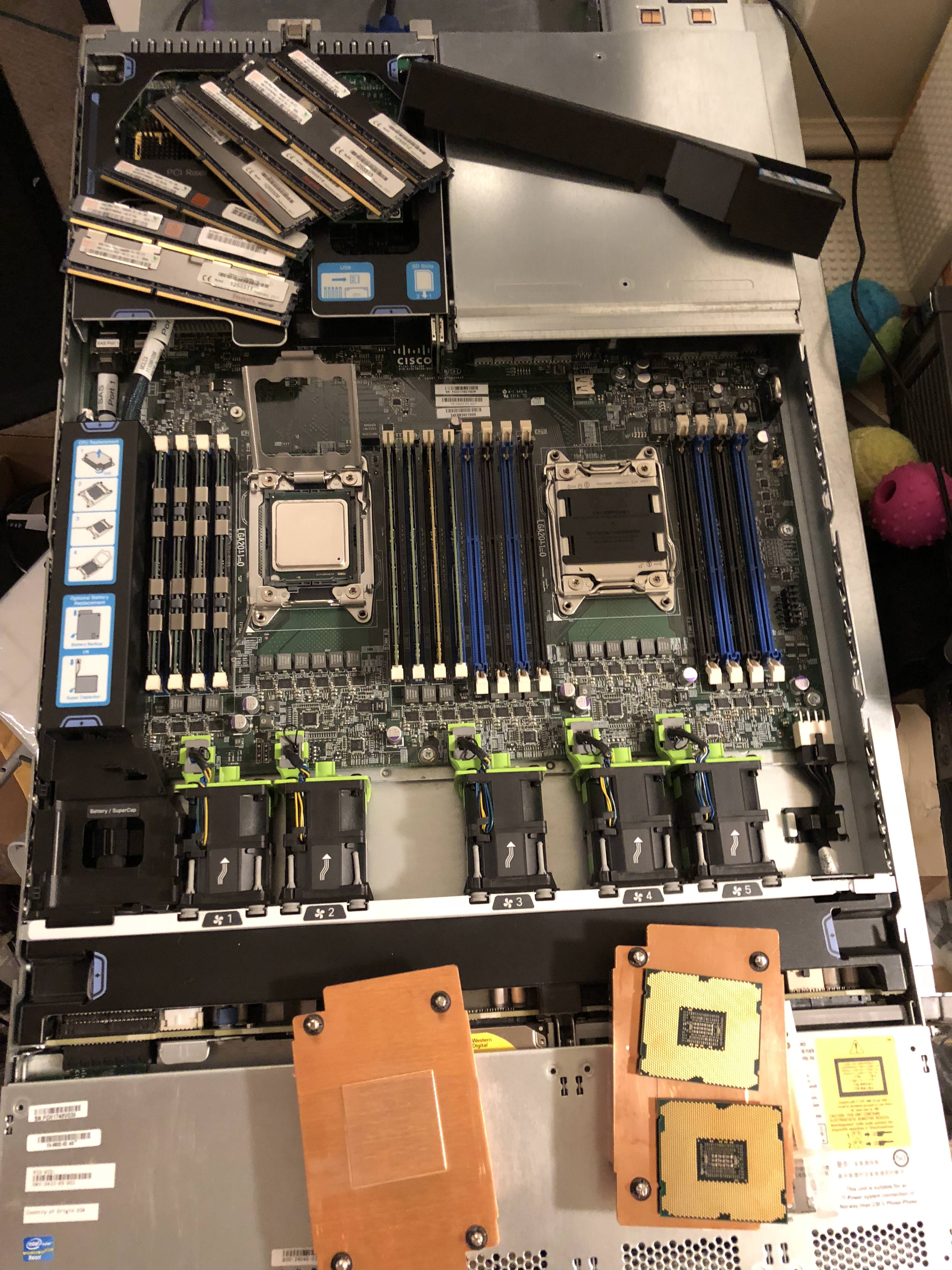 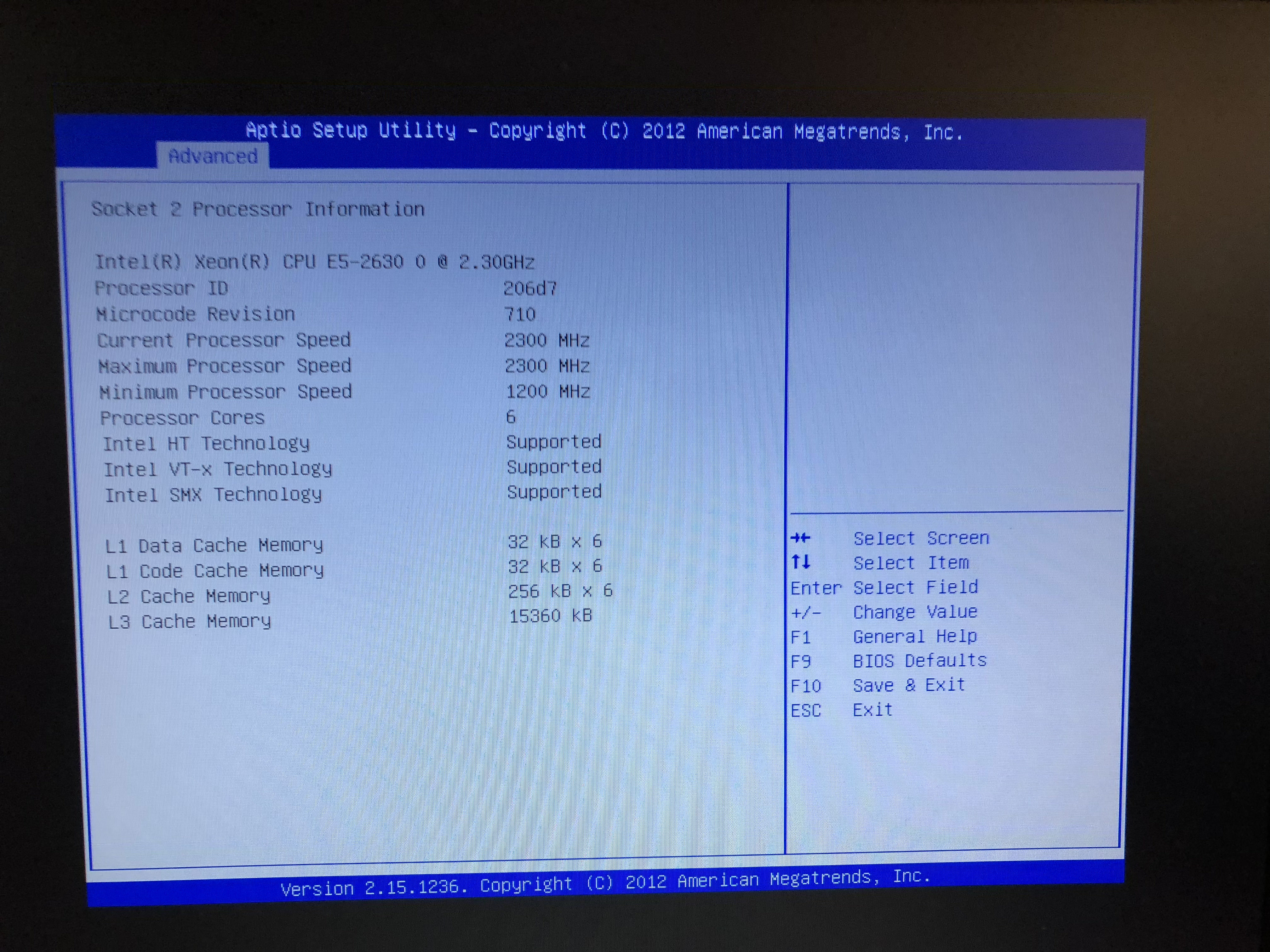 Well, apparently, my ESXi license only allows me to allocate 8 vCPUs per VM, which just wasn't going to cut it with 24 available. I should have known better than to configure this machine right away as a production environment, because OF COURSE I would want to play with it in different configurations with different OSes. So, what I did was re-configure my Enterprise GIS server (SFF ThinkCentre M91p) with Ubuntu 16.04 so it now runs caddy, observium, UNMS, (other misc. docker bits), plex, my SSH bouncer, and others I am probably forgetting. This frees up the C220 M3 to be more of a playground.

The first thing I did was pull the two 128GB SSDs and the 750GB laptop drive, leaving just the 600GB SAS and the two 480GB SSDs. I also pulled the Adaptec 2405 and switched back to using the onboard RAID controller, which can apparently be configured as either intel or LSI softRAID. Server 2012r2 didn't see the intel RAID arrays, but the LSI ones worked fine, so that's what I'm using now. I have setup the Hyper-V role but have not tested it out much yet, so that's next. I have done some remedial benchmarking and overall it comes out a bit ahead of the ML350 G6 - not significantly, but this is to be expected. The X5660s in the G6 have a 400MHz higher ceiling, but the ML350 G6 also pulls about twice as much power (both under load and at idle) than the C220M3 does.

More testing and fiddling with Hyper-V is forthcoming.

First off, I will heartily admit that these benchmarks are by no means good, I just wanted to do them quickly. They were performed in Arch with the gnome-disks tool's built in benchmark. 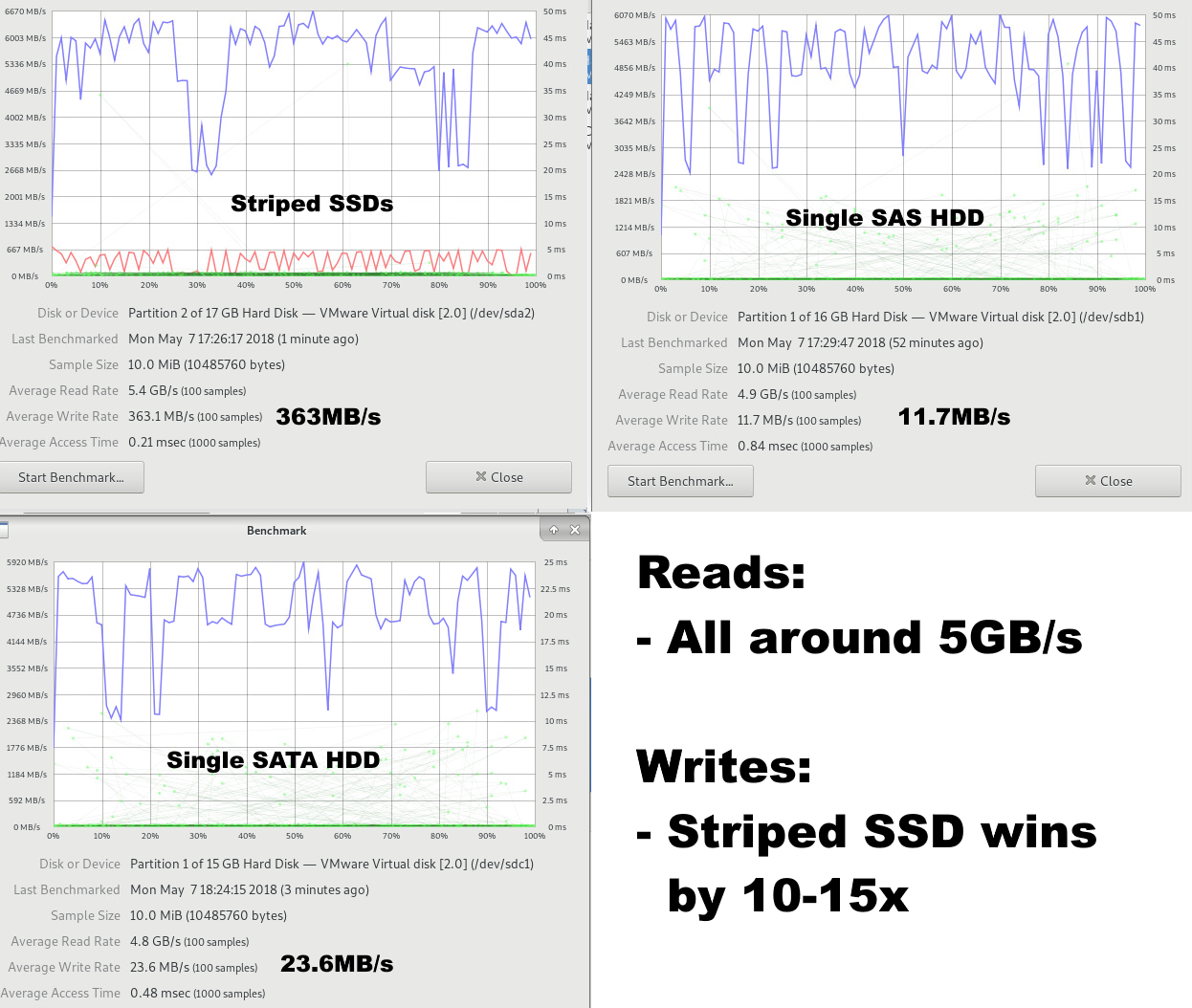 All this tells us is "striped SSDs are faster than single HDDs!" What I really should do is get some good (and identical) HDDs and perform the same test, and test the SSDs standalone as well. I don't want to fiddle with it that much, so this is what we have.

It would be better to run these tests bare metal, not through a VM/Host, but seeing as I am going to be using this machine solely for VMs, it made sense to me to know what the VM performance is going to be. I don't really care about the absolute performance, since all it will tell me is how much overhead ESXi is injecting into the situation, and I don't really care about that.

In any case, I think my RAID1+0 of four 240GB drives will perform great.

Adaptec in the Cisco!

So far these posts have been severely lacking in media, so this one is going to have a ton of pictures to overcompensate.

I got home, and after talking to and congratulating my wife for completing her first day at a new job (woo!) began the process of installing the Adaptec 2405 into the C220M3. The longest part of the process was waiting for updates to finish running on a Windows 7 VM. Once that was done it was pop the lid, install the card. Done. Sort of. 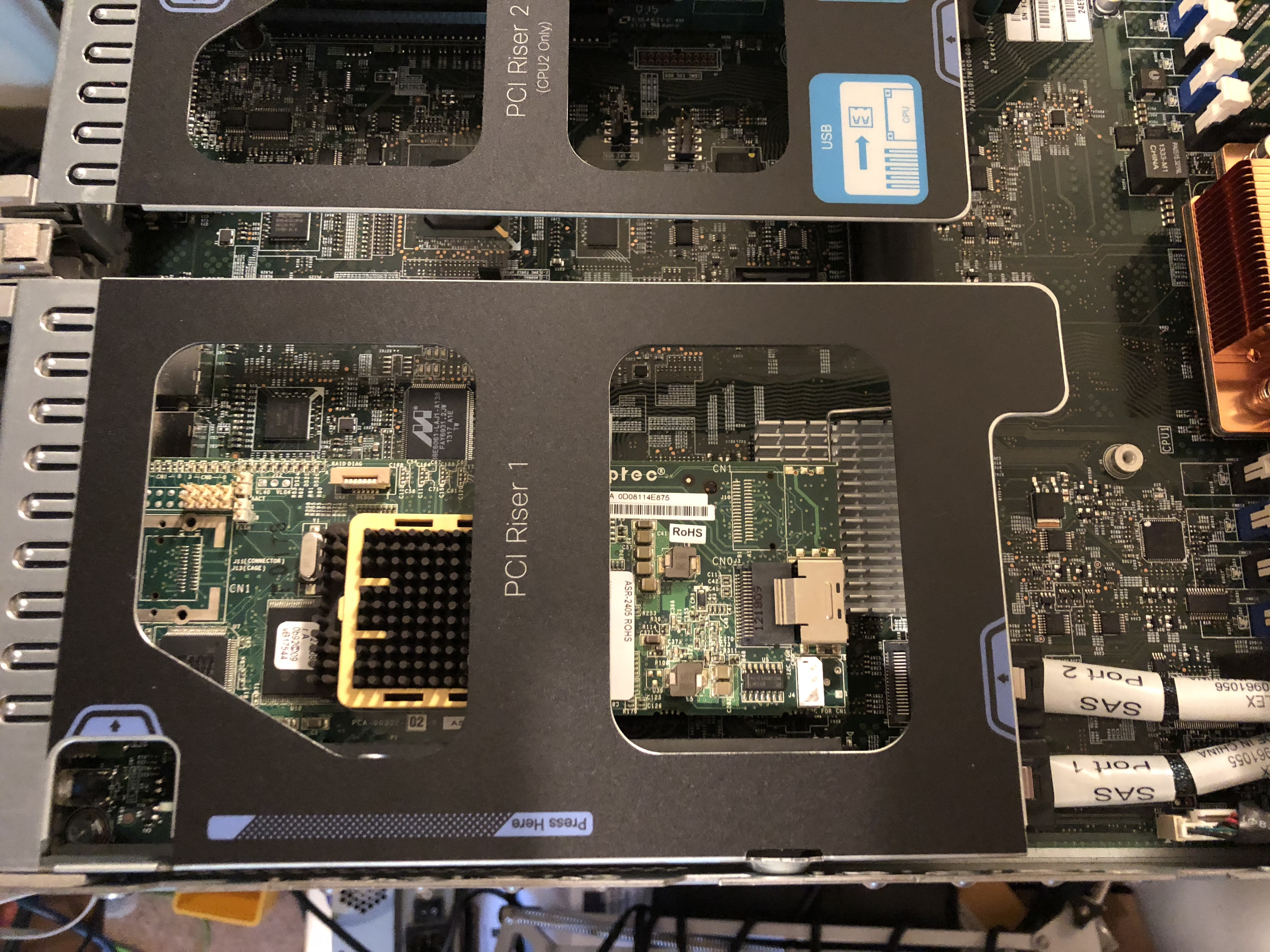 The card fits just right into the PCI1 riser, you can see the two SAS connectors very conveniently close on the motherboard... but there may not be enough slack in the cables.... 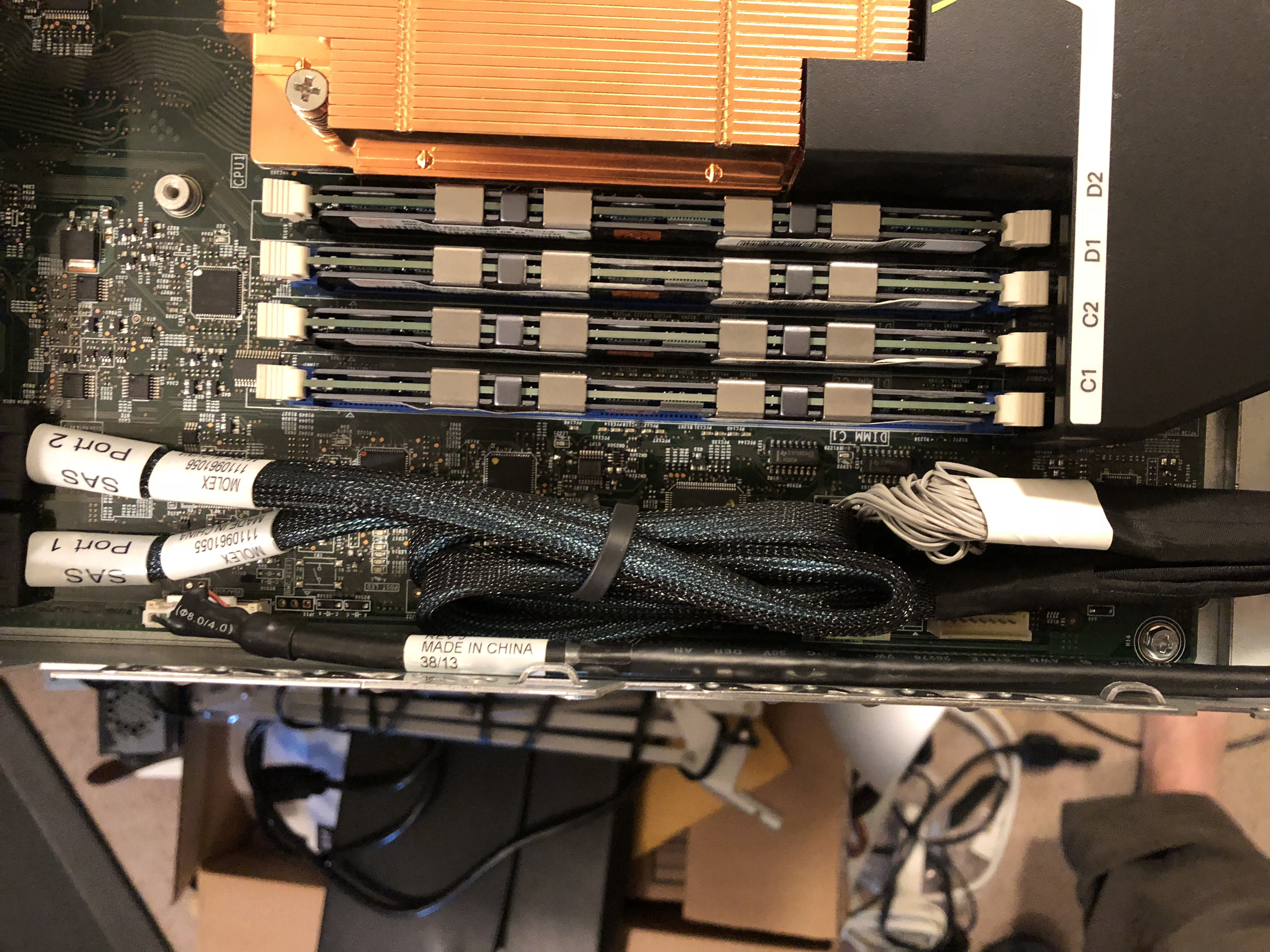 Yay! Cisco provided additional cabling under one of the plastic shields! 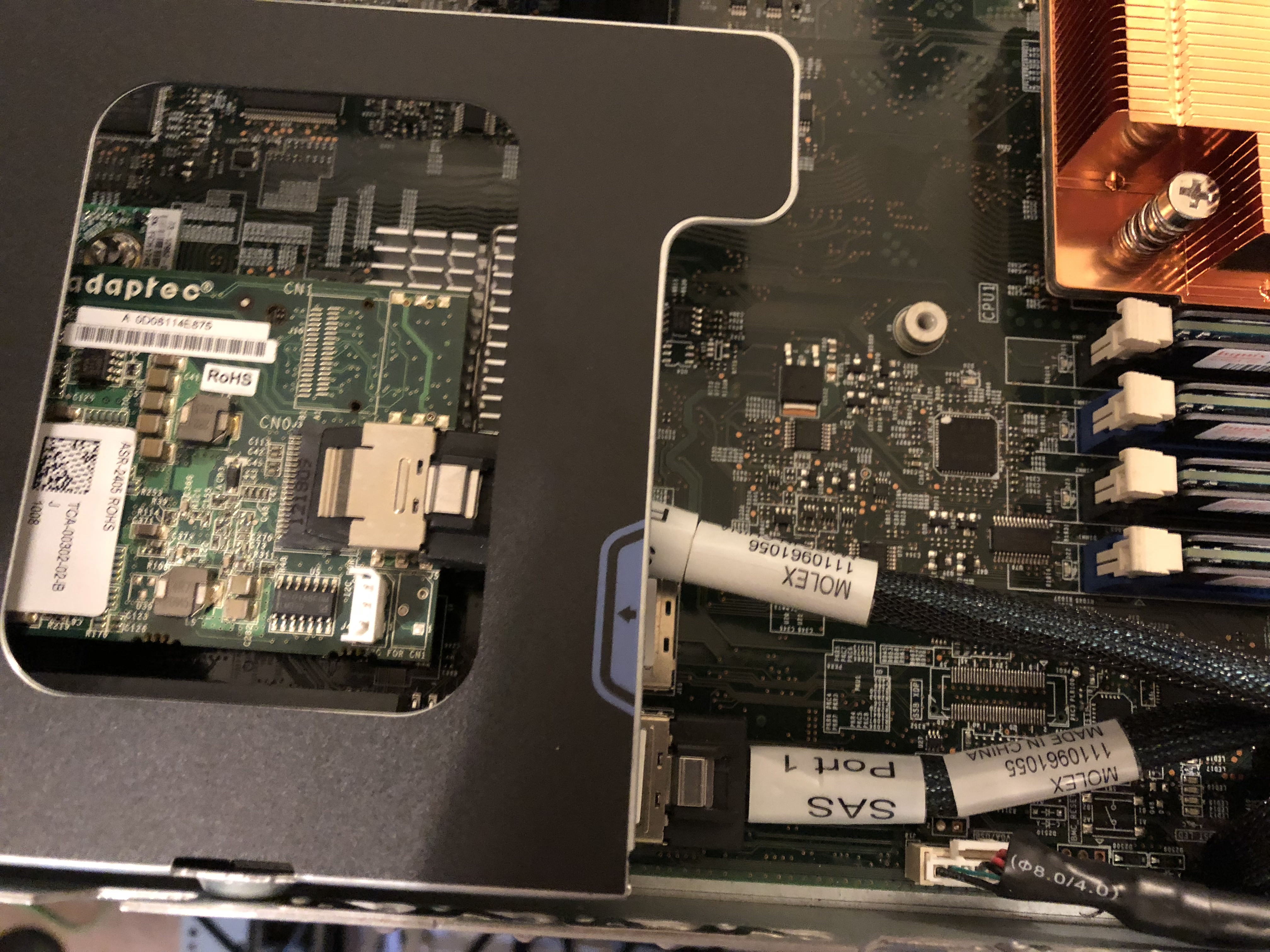 The SAS cable reaches the extra two inches with no problems. Time to boot it up... 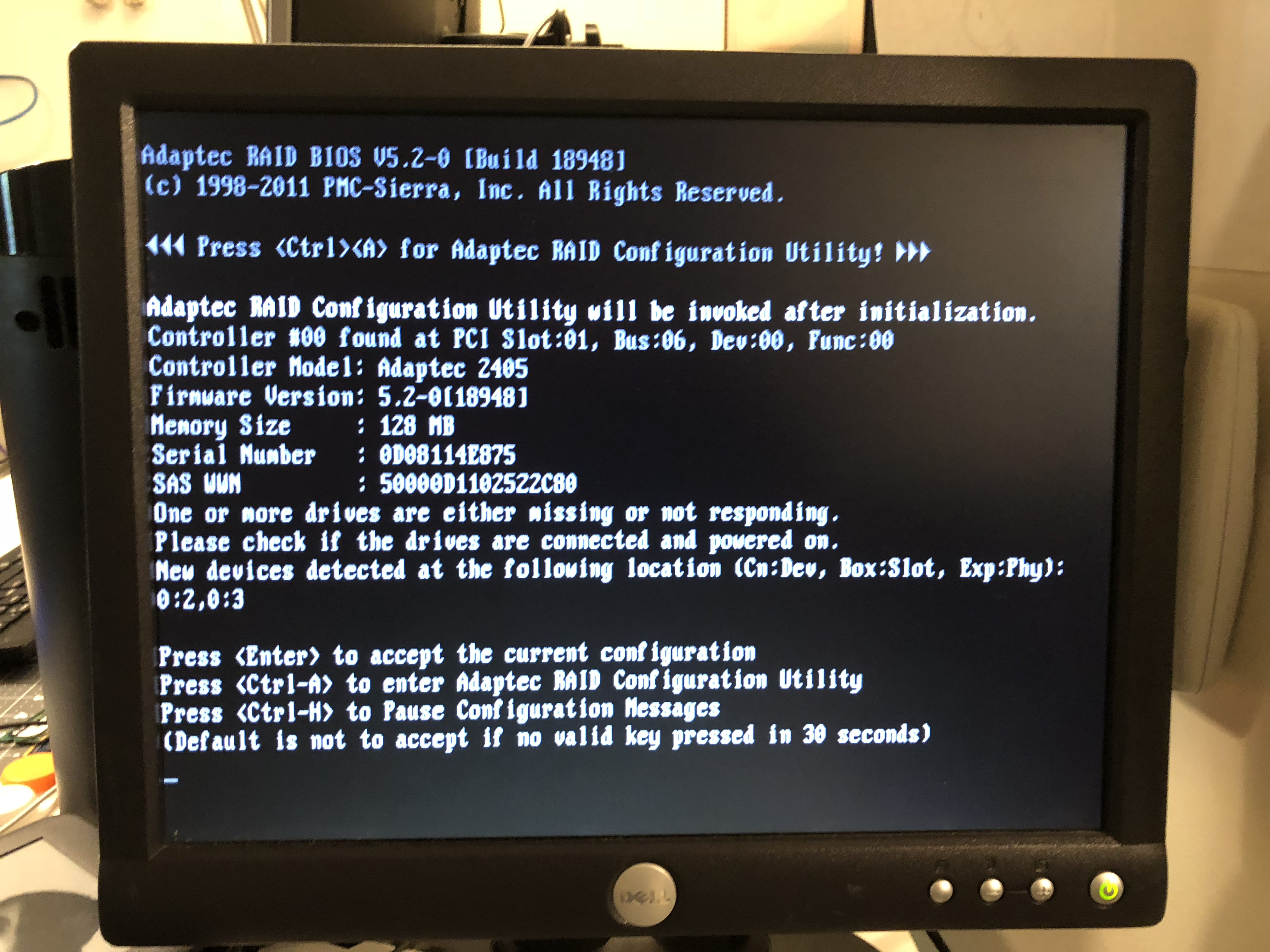 It works! Hooray! (Ignore the 15 minutes it took me to figure out how to re-enable option ROMs in the BIOS...) 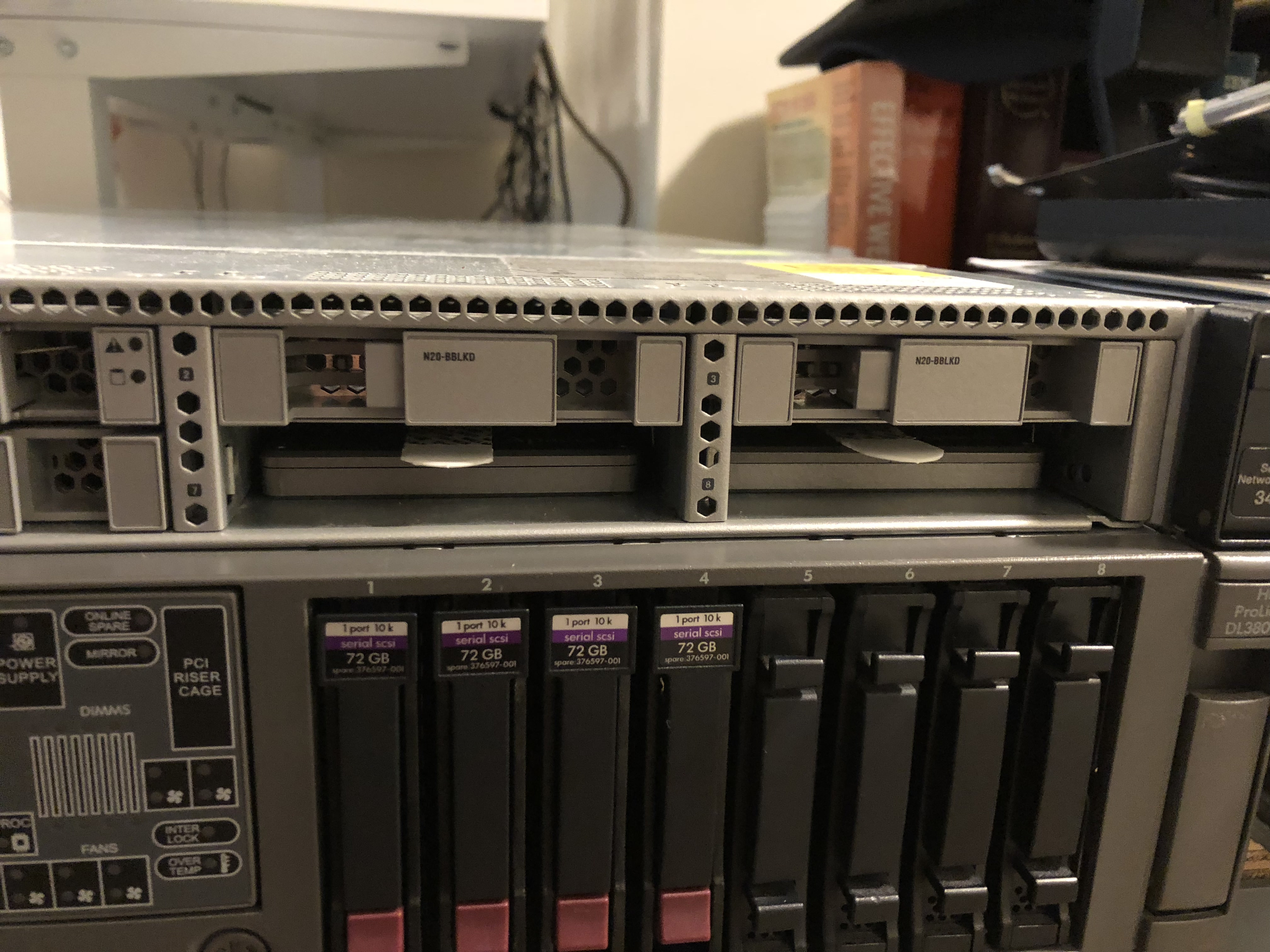 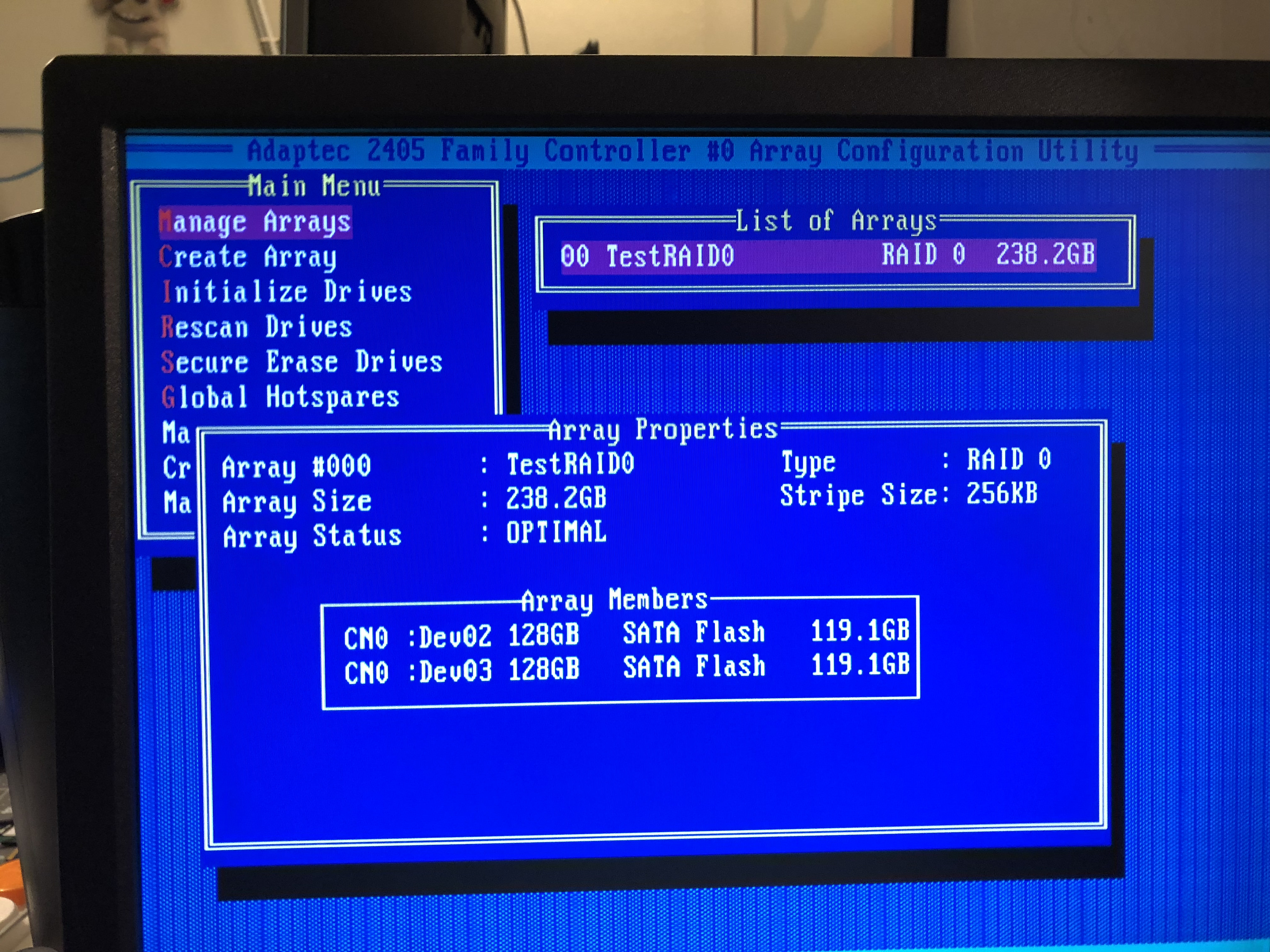 Pulled them into a striped array.

And ESXi sees it!

Figuring out the servers Part II

In the past week or so since my last post, I've been chewing on the questions I listed pretty much non-stop, and I'm pretty sure I have made a decision - or series of decisions, about what to do.

Drives are my next concern for the C220M3, and as SSDs continue to fall in price they look better and better. I saw a 1TB SSD for $230 at Best Buy the other day! The Intel soft-RAID controller onboard is not supported by ESXi except as a pass through device, so I will need a hardware RAID controller. I have my Adaptec 2405, which, while older, does work well in ESXi and offers the good enough performance at it's price point. Granted, it only has one SAS connector and therefore only supports four drives, but it should be able to fit into the chassis nicely and host bays 5-8. I only have two so far, but ultimately I'd like to have four 240GB SSDs running in a RAID1+0. I'll test fit the 2405 in the C220M3 later this afternoon and see how it goes.

So the proposed buildout for the C220M3 is as follows:

Now for something completely different. I decomissioned the Optiplex 3010 as my pfsense box - I am now back to running the EdgeRouter X. Upgrading to EdgeOS 1.10.1 was a chore, but it is running great and my previous DNS woes have been resolved. I moved the i5-3245S from the 7010 into the 3010 and have set it up as my secondary desktop, sharing a kb/mouse with my primary desktop, and it's running ubuntu 18. The 7010 has the 3010s i3 and once configured with 4GB RAM and a base OS, will be sold.

Getting started and figuring stuff out (what am I doing with these servers?)

Okay, well, I have had this blogging platform (or whatever it's called) up and running for about three months now, so I figured I might as well go ahead and post something. I don't have a good introductory post idea or a well structured project, but I have been thinking about my home lab quite a bit lately and I need to start recording some of this mess.

I have a lot of computers, new and old, super powered and super dinky. Right now what I'm most interested in organizing and planning for are the newer machines that can handle modern workloads and are actually (potentially) useful to me. Right now what I'm looking at is as follows: (specifically for "infrastructure" machines)

So, there's that. Right now my plan is basic: go ahead and get a heatsink for the C220M3, since I know I will drop another CPU in it. Filling it to 64GB RAM (using the 4GB DIMMs I have) will leave 12 (48GB) for the ML350G6, leaving it still viable for sale. Get a cheap CPU for the T3500 - like a $25 hex core or a $6 E-series 4/8, giving the X5660 back to the ML350G6. Then continue to eye prices for either another E5-2609v2, or splurge on a pair of 2620s, 2637s, or 2640s. If I can find a super cheap 2609 I may just jump on it, and likewise if I can get a good deal on a set of hex or octa core chips. Frankly I'd rather go ahead and invest in chips with more, faster, cores because I know I have workloads that require fast cores, and I have many that also can leverage massively parallel distribution (e.g. raster processing). I also don't want to have two cheap 2609s holding me back from upgrading - one big step is wiser than two medium steps. Just have to wait for a good deal.

Expect to see more rambling on this in the future...