I have run some form of an RTL-SDR based ADS-B receiver every since I first learned it was possible back in college. The idea of using a cheap ($10-20) USB radio to pick up aircraft transponder signals, and then use some open source software to decode and visualize it was beyond cool. A few years ago flightware came out with a program called "PiAware" where if you used their software (a combination of raspbian and dump1090 plus some of their own customizations) you could feed your data into their system to help augment their data, and in the process you got a free premium account.

I never used this because 1) I wasn't interested in a premium account, and 2) I ran my own customized version of dump1090 and didn't want to lose out on my sweet added features. Additionally, even though I know that the software can be run on any linux system, I had always felt that the Raspberry Pi was under-powered and not stable enough to run like this for an extended period of time. About a week ago, I decided to revisit the matter, mostly because of the premium account.

I've been doing a lot of testing with my company's real time & big data spatial processing tool, GeoEvent Server and I was under the impression that the premium account would give me an API key to access their feed. Turns out I was wrong, that has to be paid for separately regardless, but I decided to follow through with setting up PiAware anyway. I have an Raspberry Pi B 3 floating around doing nothing in particular, and I figured it should be beefy enough to handle the task at hand.

My setup is simple but works well, it has been running for just a few days now. My number one question, as it always is with deployed RPis, is how well the SD card will hold up. I'm using a 32GB SanDisk Class 1 card, but you never know. My antenna is the official FlightAware branded ADS-B antenna, a dark green plastic tube about 2ft long with an N-connector on the bottom. I have it mounted on top of a tripod standing up in the attic. 20ft of low-loss coax connect it to the receiver - first to a band pass filter that kicks out FM and all the other RF noise, then to the FlightAware Pro radio itself - this is a standard RTL-SDR with a tuner and amplifier somehow "tuned" to 1090MHz. There is a "Pro Plus" version of this receiver now that has the band pass filter integrated, and I would very much like to see how it compares. The last piece is the Pi itself, the only other thing connected to it is a CanaKit 2.5amp PSU - it's hanging off the network via WiFi, also a test.

Performance has been good, the software barely taxes the resources of the machine, and it hasn't had any issues holding up to the network. Their updated version of dump1090 has a number of features that I had added to my own, so I have no qualms with using it now. It also still has the always-updated JSON endpoint with aircraft information which can be readily ingested into GeoEvent Server - more on that later! 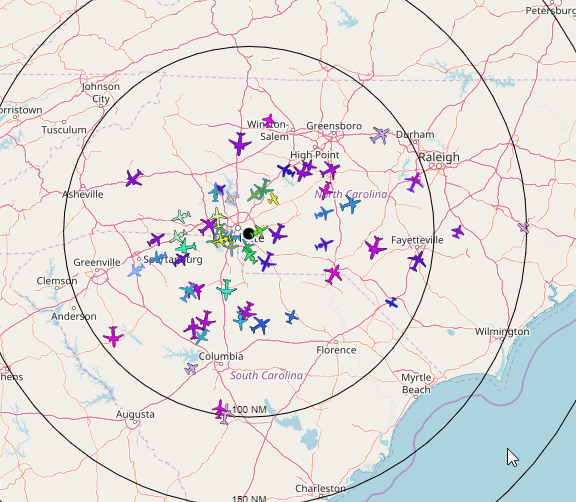 Despite being mounted in an attic, surrounded by trees, the coverage is quite good. I find that 7am-1pm tends to be the busiest time.