While there isn't a whole lot I like about living in Charlotte, having easy access to a place called "The Grid" is really awesome. The Grid is a store run by Goodwill, and unlike your typical Goodwill, The Grid only sells tech - computers, TVs, game consoles and games, lots of accessories - if it plugs into a TV or Computer, it'll show up there. Quite a few of their donations come from local corporations and businesses, and often really interesting hardware shows up there - it's actually where I found the then bare-bones ML350 G6. Lots of machines they get still work fine, and so they get tested and have windows installed on them, and while they aren't too poorly priced, they are priced higher than I'm interested in, especially given that I don't care for a licensed OS, RAM, or storage devices. Back in the far corner there's a series of shelves for the "as-is" laptops and desktops - stuff that is either too old to bother testing (rarely older than a core2, granted) or obviously heavily damaged. I have gotten a lot of good finds out of that "as-is" pile.

Every once in a while I have noticed these little HP consumer desktops in the fray, but often they're in too bad shape to consider. Today, however, they had two almost identical units - each for $10. A very reasonable question to ask is why on earth would I be interested in some junky $10 consumer HP desktop? Well, it's because of just how junky and low end they are. This machine is a member of the HP p2 line, likely HP's lowest-end consumer desktop - I've come to understand that they could often be found new for $200-300 or less. My machine is a p2-1334, and one could almost describe it as a netbook in a MicroATX case. The motherboard is actually Mini-ITX - no PCIe slots (not even for WiFi!), absolutely no socketed processor, and no standard 20pin power. It runs off a standard 65w 19v HP laptop power supply, which I have a few of (yay hoarding?)

It's pretty good looking from the front, if a little plain. 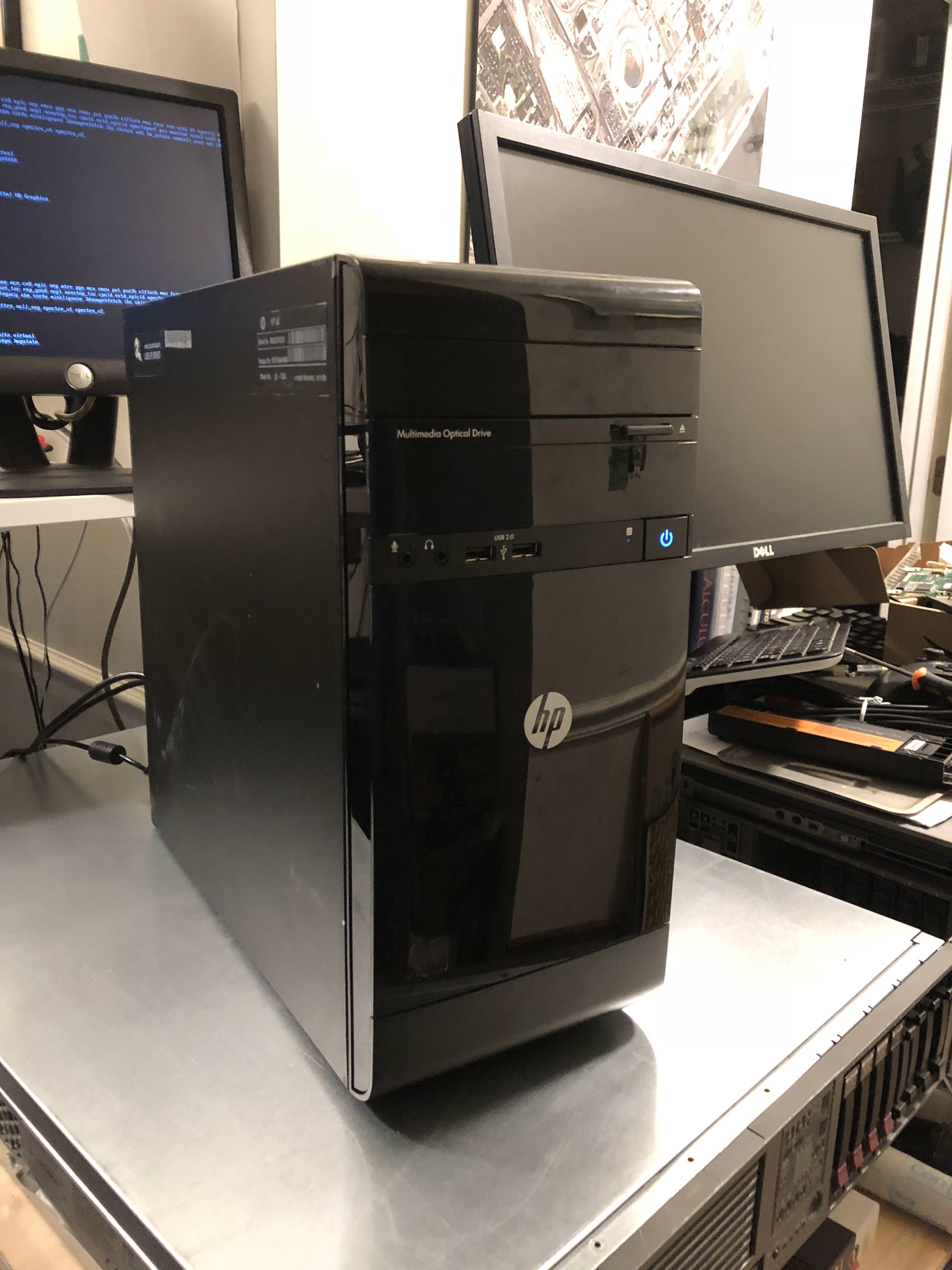 No power supply or slots - it's a normal MicroATX case otherwise. I find it surprising that they opted for DVI over HDMI - perhaps newer models use HDMI? Normal audio jacks, four USB2.0 on the front, two at the front, headers for two more are unpopulated. Ethernet is only 10/100 - super cheap Realtek chipset. I do appreciate that the I/O shield is a knock-out variant, I may move this board into a Mini-ITX case someday. 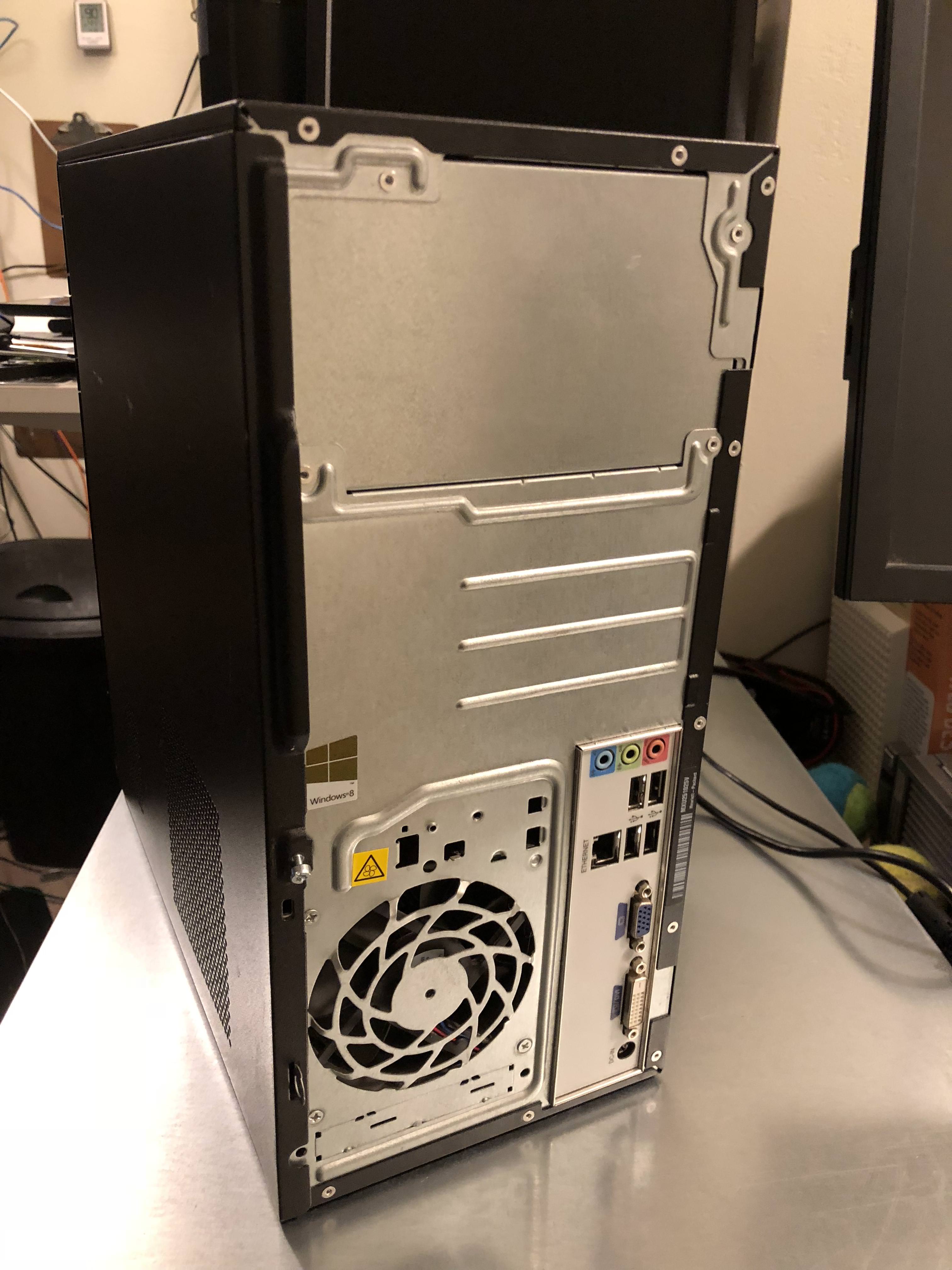 This should give you a good idea of how empty the case is inside. There's a single exhaust fan at the rear, and just a void where the power supply and MicroATX slots would be. The optical drive is actually part of why I decided to purchase it in the first place - I'm running low on drives that can burn DVD-DLs, and believe it or not, this one can - so I figured at the most I was playing $10 for an optical drive. I added the SSD once I got it home, it's mounted just to the left of the motherboard, on the underside of the brace. There are screw holes for both 2.5" and 3.5" drives - clearly suited for whatever was cheapest that day. Both drives are powered directly from the motherboard, and I imagine it can't handle much current - no 15k drives here. There are no mounts for additional drives, but there are a few spots where one might have mounted other accessories. One version of this case held a card reader by the front panel USB ports, but it's not populated here. 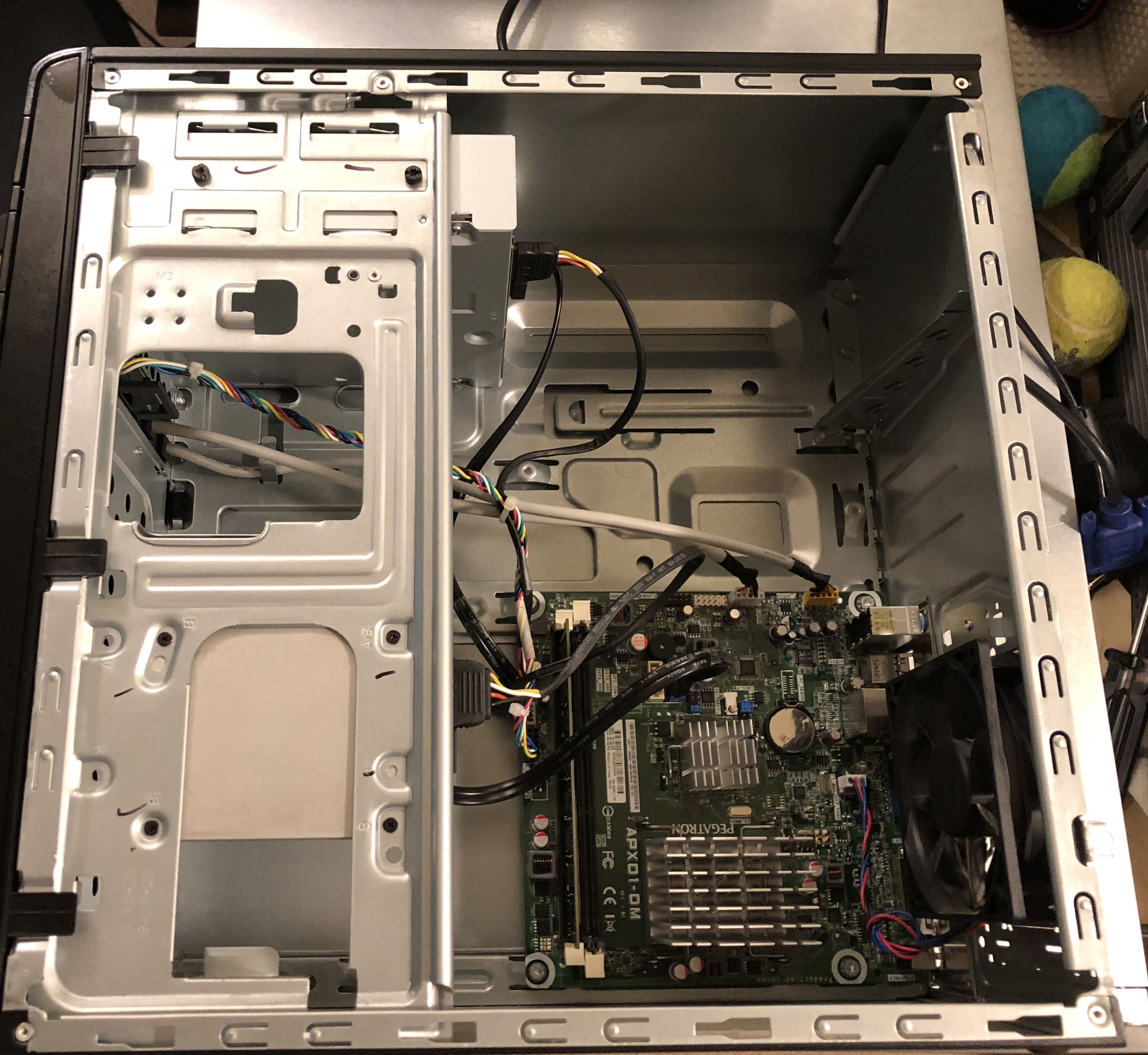 While removing the board, one of the plastic brackets around the SATA power connectors decided to come off with the cable. It did slide back on easily enough, but it goes to show that these things were not meant to be disassembled. This is a total throwaway computer. 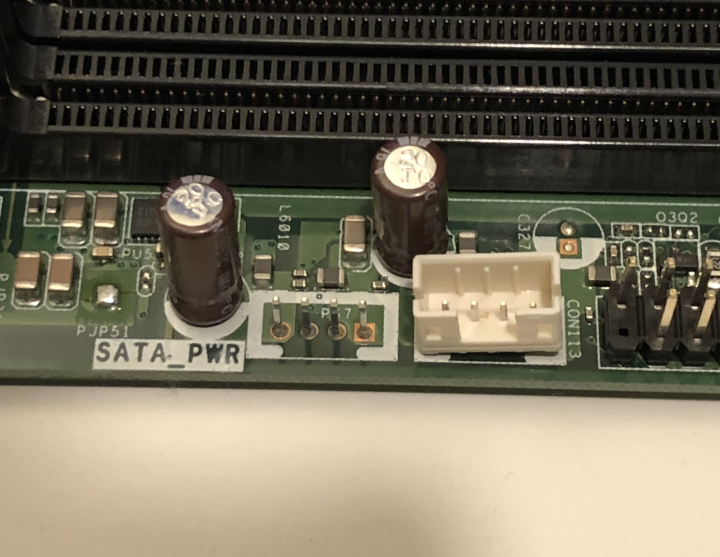 Not surprisingly, this is a very bare board. I decided to pop it out in order to clean off the bit of dust present as well as to at least do the CPU and FCH the honor of replacing their thermal paste, which was horrendously caked on. The RAM, DDR3, is the users' only option for expandability, and apparently the AMD Hudson-D1 FCH supports up to 32GB RAM. HP's docs for the board say it caps out at 8, but I have tested it with as much as 16 myself, so I am assuming it could handle 32 - though why someone would put $150+ of RAM into something like this is beyond me. 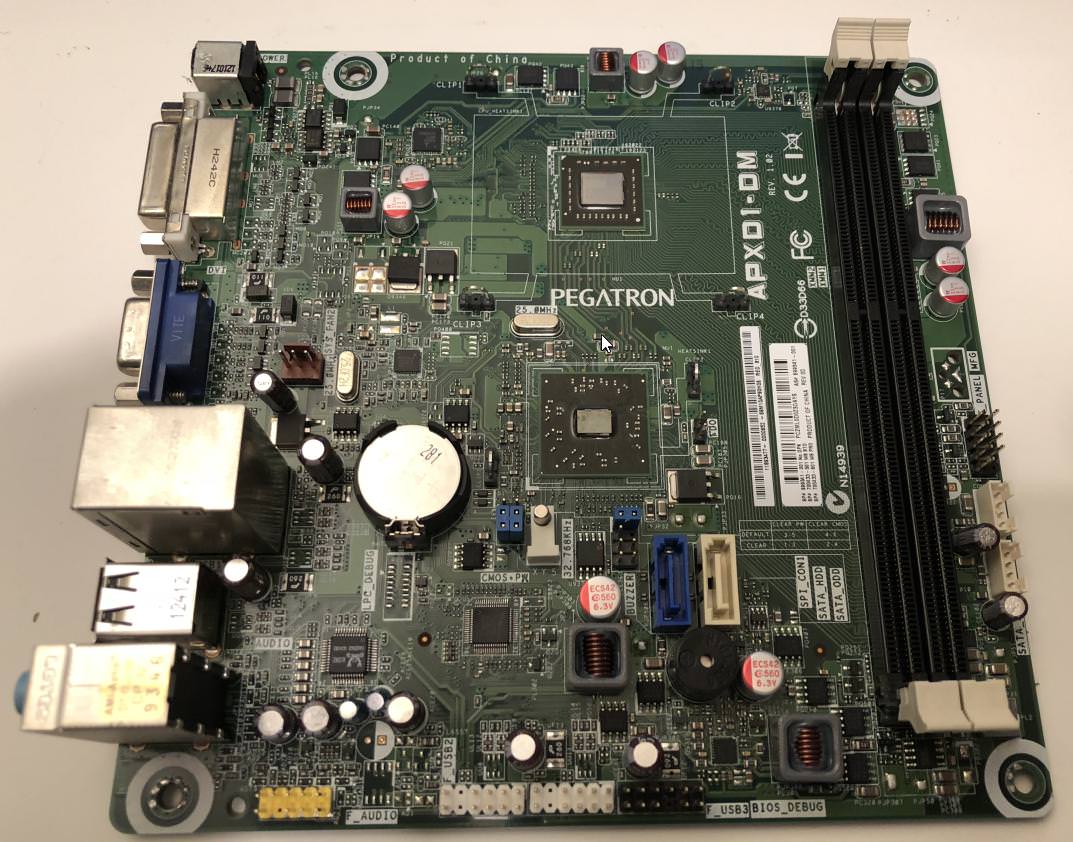 The CPU is an AMD Fusion E2, this one specifically is an 1200, though they are apparently sold with up to an E2-1800. The TDP is less than 20w, thus the passive clip-down heatsink. I haven't benchmarked it yet, but my expectations are low. 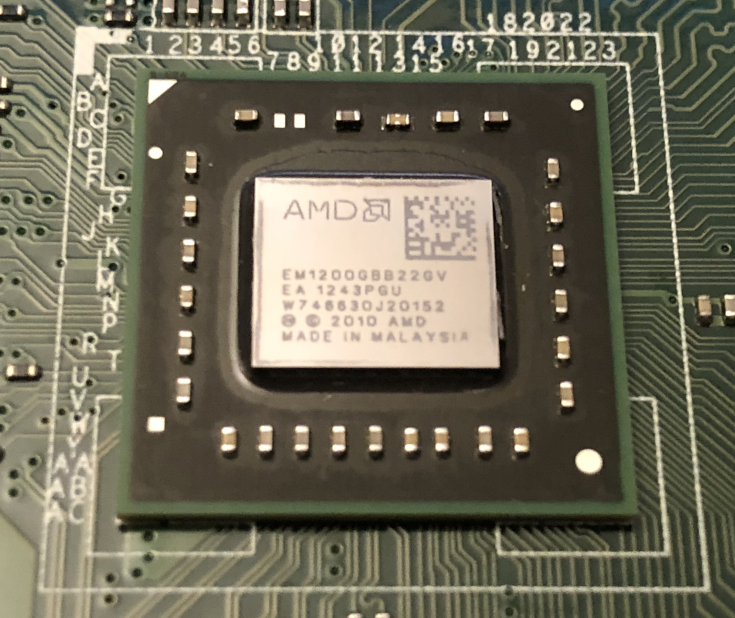 Update: For giggles I threw Windows 8 on it this morning and ran Cinebench. Performs about as you'd expect. 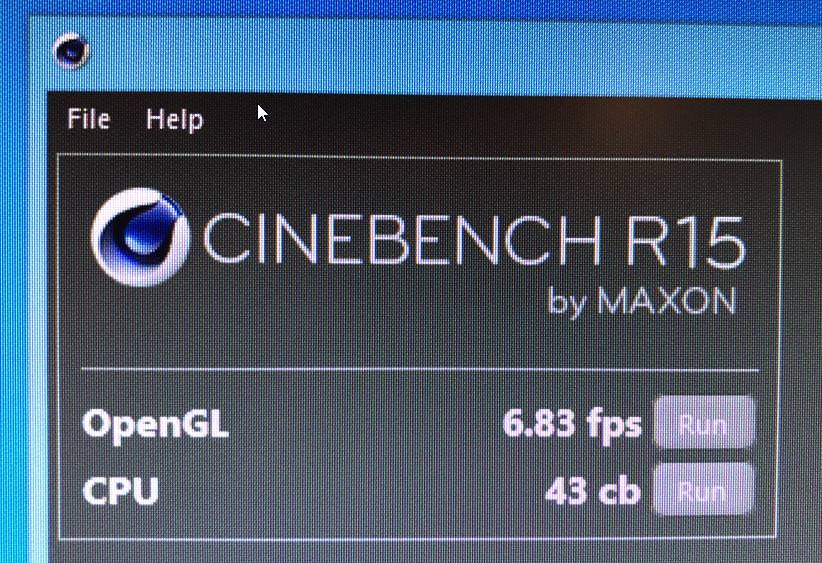 Right now I have Arch installed on it, because that's sort of my go-to for new x86 machines these days. Eventually I will try Windows 8 (as it shipped) on another drive, but I don't have the patience for that right now. For what I have done on it so far (which, granted, has been very little) it feels just fine, snappy even. I imagine even with Windows 8, as long as it had 8GB RAM, this machine would be perfectly suitable for basic day to day tasks.

For reasons that are beyond me, I have already developed a very peculiar attachment to this machine. Expect to hear more about it in the future...

PS - I love that the board was manufactured by "PEGATRON" - what is that? 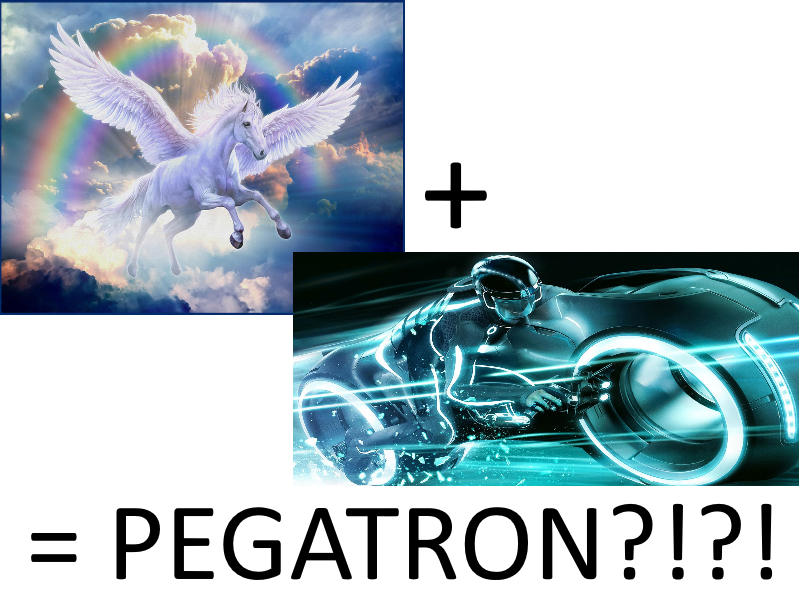