I found a good deal for a 480GB Kingston NVMe drive (true NVMe, not the "SATA on m.2 rubbish) as part of prime day, so I decided to go ahead and bite the bullet and slap one in the Inspiron. The main advantage this would give me is the ability to configure the second drive, the 2.5" SATA drive, as a secondary boot drive for linux, or additional storage if necessary. A day layer the drive showed up in a tiny envelope and the upgrade could commence. Prior to wiping the 2.5" drive, I ran Veeam to get a full system image over to the NAS. I wasn't planning to restore any data from it, but just in case something wonky happened I wanted to have an image I could quickly restore from. Under normal circumstances I would have simply mirrored the 2.5 over to the NVMe drive, but I wanted to use this as an opportunity to upgrade from home to pro, and I wanted to do that as a fresh install rather than an upgrade from within windows. 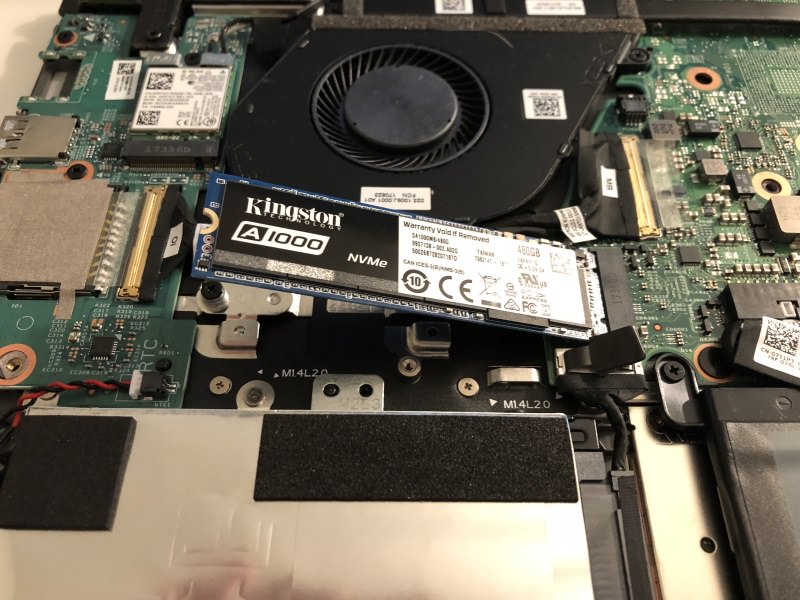 The physical installation was a breeze - pop off the bottom panel, remove the m.2 retention screw, drop in the drive, replace the screw. Could hardly be easier. The software installation, however, was somewhat more involved. The reason being that I didn't want to use the Windows 10 Home license key that is embedded in the system firmware. It took some trial and error, but what eventually worked was creating a PID.txt file in D:\sources\ on the installer. The key I wanted to use was embedded within the PID.txt file, and the installer automatically applied it, then activated it after the system started.

I wont bother listing any benchmark results - I ran CrystalDiskBench and it scored exactly as well as it should have, what you would expect for a mid-range NVMe drive. This wasn't installed for speed, however, rather it was installed to gain a second drive in this system. Once it was done and configured as I wanted, I popped in Ubuntu 18.04 install media and installed that onto the the 2.5" drive. Initially I had intended to remove the original 2.5" drive I was using and replace it with one of my older 128GB drives, but apparently this machine has some very strict thickness requirements and only 7mm drives will work. As it stands, it has a 480GB NVMe and 480GB 2.5" - more storage than I need, but until I can get a slim 120 or 240 that's not in use elsewhere, it's what will stay. Alternatively, I could split it in half and make a scratch disk with what's left over, but that's just not fairly low down on the importance ladder.